A startup tale – The Tapping of 1487 Brewery’s First Kegs Appears to be a Taste of Success. 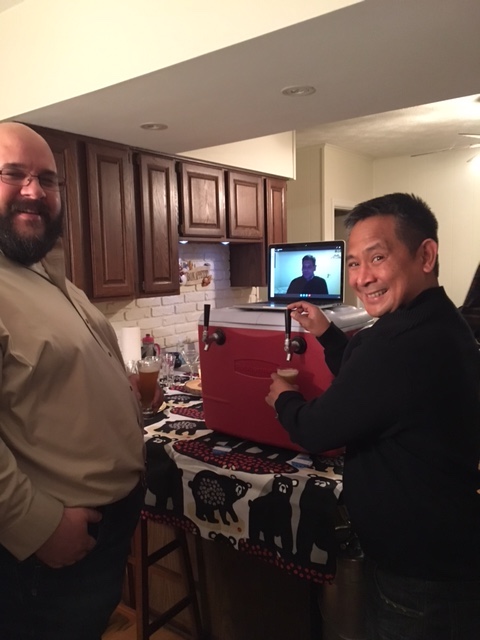 With equipment challenges still persisting in the start-up’s pilot brewing system, founder Ben King and his brewer were still able to serve samples of their flagship Hefeweizen and original German-American Pale Ale at a private event in German Village Thanksgiving weekend. The entire team was engaged, even Thomas Garbe from Germany interacted with guests via Skype as they were pouring their samples. Friends who attended called the traditional Bavarian-style beer “high-quality” and “a cut above” other German beers they’ve tried already being served up in central Ohio. “The beer was not without challenges, as expected for the very first brews on a new system. We are still pleased by the results and look forward to making it even better in round two” King said.

1487 Brewery is currently fermenting a third recipe, an Altbier which is a German-style amber ale and they’re planning future tastings for more beer lovers in the weeks ahead. What they hope to be another flagship, their Munich Dunkel has been delayed due to equipment failure.  After working with their equipment supplier, they have obtained a replacement pump and third fermenter so they can brew three at a time to catch up.  The challenge with lagers (their Munich Dunkel) is they can take up to 3 times longer in fermentation.

They welcome anyone to come visit them at their next event at the Alexandria Christmas Community Festival on Saturday, Dec. 10th.They’ll be serving samples of their current brews inside the The Village Spa in Alexandria from 9am to Noon.

They welcome feedback and pledges on their Kickstarter crowd-funding campaign which ends December 15th.